The next generation challenge 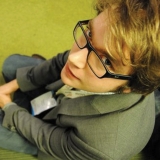 Tom Demeyer is most known for his work and dedication at the Union for Students in Flanders (VVS), as board member and later as chairman, he had serious influence on higher education in Flanders. After finishing his studies Tom went to work at VOKA, a network of entrepreneurs in Flanders.

During his time at VVS, Tom found out that the new generation of students are very keen on working with new and noteworthy tools and social networks during their studies. Yet most universities and professors are not used to teaching in a way that is adopted to those new technologies.

Tom Demeyer has his own views on how those millenium students should receive their education and how social media and new technology has an impact on that. He will present those ideas in his talk at TEDxUHasselt. He also pitched those ideas at the Indigo conference this year in his presentation "generation now".

Tom also has his own blog over at http://tomdemeyer.wordpress.com