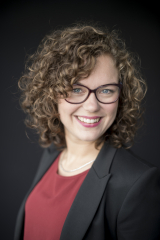 In the beginning of 20th century, a series of discoveries by scientists like Einstein, Heisenberg, Plank and Schrödinger initiated the first quantum revolution. Leading to inventions like superconductors, lasers and transistors, it had a major impact on our society. In the 21th century, scientists increasingly have the ability to manipulate quantum effects. This is now leading to the second quantum revolution, again with radical implications for us. Scientists believe quantum will take its place in society over the next decade and yet, still many people don’t actually understand what quantum technology is about. Dr. Julia Cramer of the Delft University of Technology has the mission to change this far-from-my-bed-attitude. She believes that a technology with the potential to extend the battery life to 10 years with one charge, or the potential to diagnose a disease with just one breath sample, deserves more attention.

Leading to dozens of new applications, this radical moonshot technology will alter our society. On the stage of TEDxUHasselt 2018, Julia Cramer will get back to basics: what is quantum and how will it improve our lives. The future is quantum, be part of it!