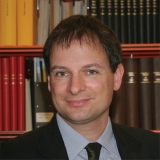 Jan Borchers is full professor of computer science and head of the Media Computing Group at RWTH Aachen University in Germany, after holding faculty positions at ETH Zurich and Stanford University.

He is interested in human-computer interaction, in particular interfaces for smart environments, ubiquitous, wearable and physical computing, user interfaces for personal fabrication and rapid prototyping, interactive exhibits, and time-based media such as audio and video. He has published the first book on HCI design patterns, several book chapters, and over 100 articles at ACM conferences such as CHI, UIST, ITS and DIS, and in journals such as ACM interactions, IEEE Multimedia, and others.

His group is Germany's best-published research group in terms of archival publications at CHI, the premier international conference on Human-Computer Interaction, and received several awards at recent CHI conferences. In his spare time, he enjoys creating interactive gadgets and playing jazz piano. He can be found at http://hci.rwth-aachen.de/borchers.