About birds and bees, innovation with universities 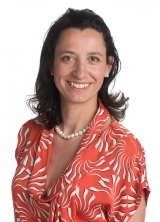 Dr Ann-Pascale Bijnens received her PhD in Pharmacutical Sciences in the year 2000, at the Catholic University of Leuven. After graduating she worked as a post-doc researcher and assistant professor at the Universtity of Maastricht, Cardiovascular research institute.

In 2007 she founded the Tech Transfer UHasselt, an organization that forms the link between the academic world and the industry.

She is a board member of several groups including NV Ondernemerstalent, NV wetenschappark Limburg and several Hasselt University spin-offs.